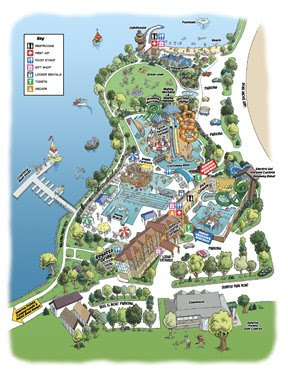 illustrations copyright J.Pittman 2008
I just finished another waterpark cartoon map. I probably have an advantage in this genre in that my degree is in architecture. So, when clients supply reference for a project, I have experience in interpreting the architect's plans into 3D. Of course, I'm doing it in exaggerated fashion to make a fun presentation.
There is an incredible amount of detail that goes into these projects. Many cartoonists are accustomed to working in minimalist styles. It takes a special patience to do this type of work. 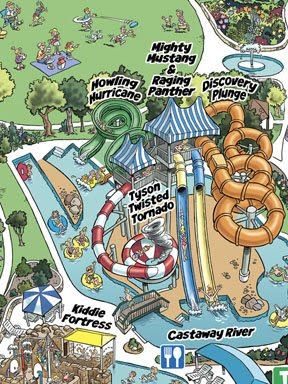 When clients furnish photos of an existing park for reference, it's funny how sometimes they will send me the exact opposite side of a view from what I'm drawing. I guess since they are so familiar with their park, they think the most common view from the sidewalk is what I need to work from. But if I have to draw the south side of a building and they've given me the north side, I can't just make up what the other side looks like! Same with rooftops. Lots of times I'm furnished with a pedestrian view of a building that doesn't show the roof. And I'm typically drawing a bird's eye view with these maps. So I have no idea what to indicate for the rooftop!
Thankfully, Google Earth is making my work easier these days with updated aerial photos of most places in the world. I can check out most of these places and, if the resolution is high enough, see a lot of the details the clients may not have on hand.
Posted by Jack Pittman, Illustrator at 10:28 AM No comments:

I thought I'd include a follow-up to my July 1 and July 14 entries since I showed the early stages of the work. Here are both finished art pieces. 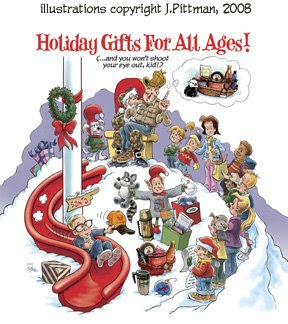 And here are a couple of close-ups for detail. 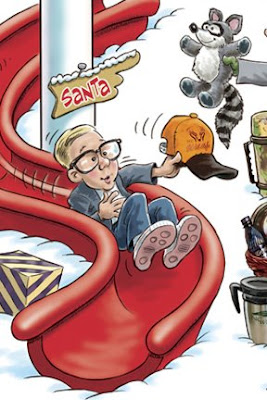 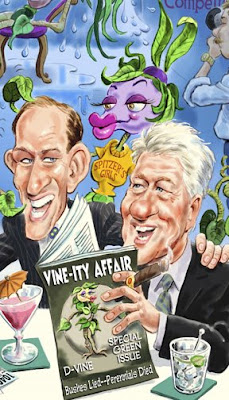 Both of these clients are very generous in allowing me to have free rein with the art. And I've won Reuben awards for the work I've done with both of these clients. I think there's a connection-- when an artist is trusted and allowed to do what they do best, their best work results. I'm grateful for that trust.
Posted by Jack Pittman, Illustrator at 8:01 AM No comments:

The Times They Are A-Changin'

Our "Usual Suspects" gathered for our monthly lunch this afternoon. We talked about how the print industry is rapidly dying as more and more publishers gravitate to the internet. Morning and evening newspapers in city editions have all but disappeared. News magazines contain cover stories the network and cable news ran last week.

It's a sad fact. For those of us who grew up in the heyday of print publishing, it's like watching an old friend with a terminal illness slide away. I imagine this is much the way veteran radio performers felt with the advent of television.

The good news is, there will still be a need for creative illustration on the web. Whether or not the form will change remains to be seen. With electronic publishing, you are no longer limited to a static image on a page. So my advice to young illustrators would be to learn animation and interactive publishing techniques as well.

Going back to the radio -to-tv analogy, those performers who not only survived, but thrived, were those who embraced the new technology and explored the new medium's potential as innovative pioneers.
Posted by Jack Pittman, Illustrator at 3:10 PM No comments:

We're coming up on our National Cartoonists Society honoring Frank Frazetta's lifetime achievements in illustration. This was a pipe dream of mine a few years ago-- no one in our organization had given him an award, yet he was an icon in our craft-- and then I just took the bull by the horns and assumed role of organizing the event.

I always wanted to meet Frank. I admired his work as a child. The first piece of his I ever noticed was a "MAD Magazine" parody of the "Breck Girl" commercials, and it had a caricature of Ringo Starr as the "Breck model."

Later, I was to find out Frank ghosted the comic strip "Li'l Abner" for Al Capp during a 9-year stint. You can see the influence of drawing the Yokum clan in posters Frank did for a few Woody Allen and Peter Sellers movies. He also contributed to several installments of "Little Annie Fannie."

Of course, everyone knows him for his fabulous fantasy art depicting Conan the Barbarian, Vampirella, and others of that genre. I am very grateful this tribute is at long last coming to pass and I will be able to see Frank's work in person and meet the man who has inspired many of us by his excellence.
Posted by Jack Pittman, Illustrator at 7:14 PM No comments: