The Glass is Half Full

A couple of cartoonist friends of mine got the bad news of being laid off at the newspaper where they've worked for many years. I started my career working at the same paper, but left there 25 years ago to free lance from my studio at home. I can imagine how distressed I'd be if I had stayed at the paper and given them so many years of my life, only to be let go.

I hope they find another employer soon. They're really quite talented, award-winners, both of them. Understandably, economic downswings require companies to look for ways to pare back expenses. But it's a shame that the management couldn't appreciate their value to growing and keeping readership, and do other things to pare back expenses rather than release such important assets. My prediction is the paper itself will eventually fold when it doesn't understand the very talents that helped it thrive.

Being self-employed for 25 years, I have seen many ups and downs in the economy. However, challenges like the ones my friends are facing can be catalysts to actually improve their careers. I think creative people have an advantage in transitional situations because they are forced to devise creative solutions to adapt to the change. One day, I hope they will be able to look back on this time and see it as a blessing that jump-started them to better opportunities.
Posted by Jack Pittman, Illustrator at 3:01 PM No comments:

On Saturday, August 30, the NCS and friends, admirers, and colleagues of Frank Frazetta met at the private Frazetta Museum in East Stroudsburg, PA, to present Frank with a special Milton Caniff Lifetime Achievement Award. This event was moving on many levels. We had a touching overview of Frank’s life in art by longtime friend Nick Meglin, the actual presentation of the Milt Caniff Award by NCS President Jeff Keane received by a moist-eyed Frank Frazetta, and a presentation of the scrapbook by event organizer Jack Pittman containing art and congratulations from various cartoonists and artists honoring Frank. The celebration was attended by several NCS members, a few non-NCS cartoonists and illustrators, and even producer Edward Summer of “Conan the Barbarian.”

The setting of the private Frazetta Museum, with turret and tile roof, has a picturesque backdrop of a lake dug by Frank himself, and adorned with sculptures across the grounds. Upon entering the museum, one is immediately awed to view the numerous original works that are such familiar icons of illustration. The Death Dealer, Vampirella, Conan the Barbarian, and various other fantasy works illuminate the halls. As is typical for illustration, the details that you see in the originals are so much richer than the reproductions.

After viewing the works of art, the group met for an Italian catered lunch adjacent to the museum and lake. It was an inspiring landscape and easy to see how it would contribute to the creativity of such a master as Frazetta. 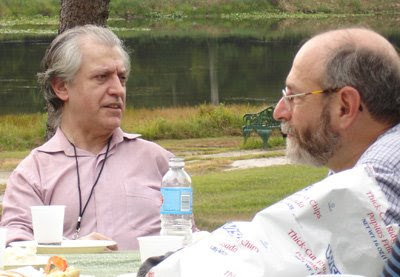 John Reiner with "Conan the Barbarian" Producer Ed Summer
Upon returning to the museum, the presentations were underway. Nick Meglin opened the ceremony with a talk on Frank’s career in art, and remarked how Frank was so gifted athletically, he could have easily been a professional baseball player which was one of his first loves. Lucky for us he chose art, for which he was equally if not more talented. 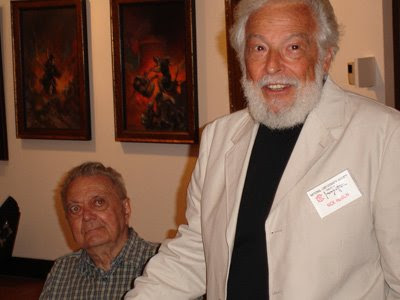 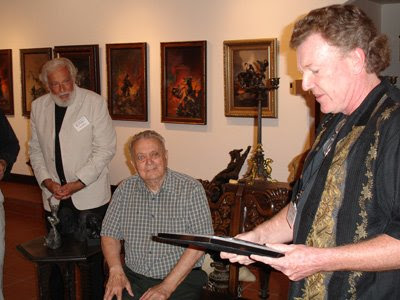 National Cartoonists Society President Jeff Keane presents Frank
the Milton Caniff Lifetime Achievement Award
Next, Jeff Keane presented Frank with the Milton Caniff Lifetime Achievement Award, noting the few giants in our field who have been so recognized. Frank Frazetta is not one easily moved by accolades. For all of his illustration accomplishments, contributions to the imaginations of other illustrators and motion picture directors, and creation of images engraved in our psyches, he has always first and foremost considered himself to be a cartoonist. So this was a most cherished award by him, and it was telling in his tears. 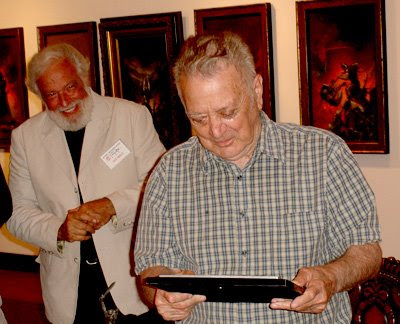 Frank admiring his Milton Caniff Lifetime Achievement Award
Finally, I presented Frank with a scrapbook collection of art and congratulations from the likes of former NCS President Frank Springer, John Reiner, Don Orehek, Bill Janocha, Mort Walker, Angelo Torres, Mike Grell, Adrian Sinnott, Mike Lynch, the Marcus Hamilton/Ron Ferdinand “Dennis the Menace” team, Michael Jantze, Jack Pittman, and 2008 Cartoonist of the Year Al Jaffee, to mention a few. Al’s art was so fitting in that it recognized Frank as “the best baseball player I ever saw.” The cover for the scrapbook was designed to look like a wizard’s tome, by motion picture art director Heather M. Morris with intricate gold-embossed heraldry icons and leather adorned with leaded embellishments. 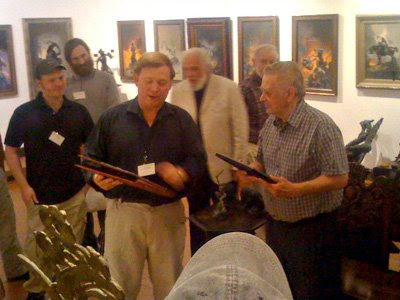 I present the scrapbook to Frank
After a wonderful day of viewing Frank’s masterpieces, sharing a good time with one another, and seeing the master himself, this particular cartoonist couldn’t help but notice after all the guests had left, a smiling Frank Frazetta returning to his home with the face of one who at long last had realized what he wrote while in his thirties in a 1960’s NCS bio:
Ambition:Someday get just a wiff [sic] of the sweet smell of success.


Last but not least, I want to thank my children--Jay, Jon, and Joy--for helping with the lunch, contributing to the scrapbook, and being such gracious hosts to everyone. As my good friend Nick Meglin put it:
"I met the other Jack Pittman Saturday...This one not only pulled off a nightmare event at Frazetta Museum in East Stroudsburg, PA, he showed us all what a good father can be. His kids are terrific -- worked their tails off, pleasant as could be, no indication of anything other than we're here to help our dad do a ridiculously tough job and make it come out perfect. And that they did. Thanks, Jack. And thank your brood for all of us."