Tribute to My Parents 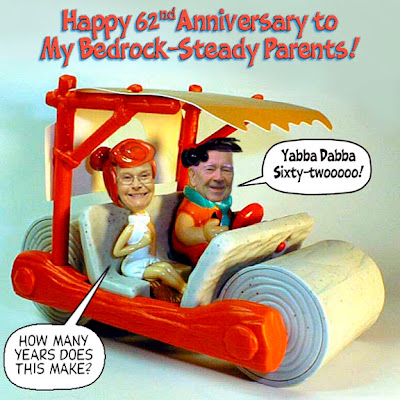 It's been a little more than a year since I posted a blog. Last year about this time I was reeling from the one-two punch of losing both parents within a very short span. Now, a year later, it's time to celebrate their well-lived lives of serving others. My mom always made me promise to never draw a caricature of her so this is the next best thing. This was an anniversary card I did for them several years ago.

They were great parents. They set such a good example of giving and taking care of others. When they were still wet behind the ears they eloped to South Carolina when my mom was just 15! (Well, it was during WWII, so maybe it's understandable.) When they returned home they didn't immediately tell anyone they got married so they went back to their parents' homes for a little spell. From reading comments from my mom's classmates in her high school annual, she missed almost every Monday at school so I figure that was a day the newlyweds got to spend with each other.

They really patterned a life of being in love with each other. Some of my earliest memories included seeing my dad come home from work and sweep my mom in his arms like Rhett Butler and waltz around the room.

Toward the end of my dad's life he had to spend time in the rest home because my mom was just too weak to take care of him with the cancer she was struggling with. But it was almost a stone's throw from their house so she was able to visit him almost daily. I took her to the rest home for their last anniversary and we had a nice, quiet dinner together. Even though his memory was almost gone he knew who his sweetheart was. It was a great evening together for them.

A few days after that, my mom fell in the bathroom and struck her head on the lavatory, breaking her neck. Despite her cancer and neck in a brace, she still was more concerned over him than her own plight. In fact, she was determined to outlive him so that she could be there for him. I think that is why she lived well beyond Duke Medical Center's prognosis for her despite opting for no treatments. As he was rushed to the emergency room several times in the last month of his life, nothing could keep her away from visiting him. She cajoled me into driving her over there in neck brace and obvious pain from cancer just so she could be there for her soulmate. My dad was in and out of consciousness but when he saw her he would light up! She leaned forward in her chair to say, "I love you, I love you, I love you," and he'd reply, "I know, I know, I know!" It was a shot in the arm for both of them!

My dad graduated on December 22, 2010, the anniversary of my brother's death. My mom was glad he was finally out of pain and confusion, but you could tell a part of her left with him. Then, a couple of months later, and appropriately on Valentine's Day, she left to join her sweetheart.

I miss them both, but I'm so glad they're out of pain now. And their example of love still remains with me. I guess that is why I am a hopeless romantic. At my mom's funeral the minister said, "If you close your eyes, you might just be able to see them dancing together on clouds to "The Tennessee Waltz." I definitely yabba-dabba-do.
Posted by Jack Pittman, Illustrator at 8:12 AM

I love the story of your parents. I visited your site and blog to see your amazing work, and ended up with more. My parents had a similar story. My mom passed away about 4 months ago. It is not an easy journey. Blessings to you as you move on into your new life.